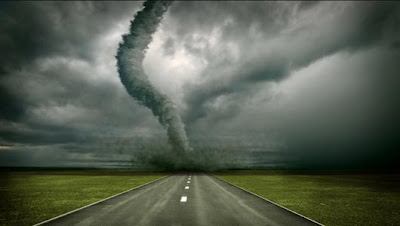 Tornadoes are one of the planet's most photogenic natural disasters, and with zealous storm chasers hunting them each spring and summer, they're well-documented on YouTube. But as this year's U.S. twister season hits its peak, we decided to sift through all that funnel footage and round up the 10 videos that best convey these storms' — and storm chasers' — intensity.


10) Veteran storm chaser Jim Reed tailed this tornado across Kansas in May 2008 along with very patient intern Robin Lorenson. The funnel is impressive, but the most memorable part comes at the 3:58-minute mark, when Reed inexplicably jogs off into the tornado to end the clip.

9) If tornadoes could make promotional videos about themselves, they'd look like this. With a sunset peeking through the clouds and shimmering background music, this scene is more idyllic than intimidating. Storm chaser Roger Hill does offer a compelling case study for the delicate beauty of tornadoes, but if the next eight videos are any indication, this is the exception rather than the rule.

8) An EF5 tornado, rotating at more than 200 mph, is a rare sight even in Tornado Alley. But storm chaser Reed Timmer and friends caught up with this one — and almost vice versa. It was the most severe storm in the deadly Great Plains Tornado Outbreak of May 3, 1999, generating the strongest winds ever recorded on Earth. Timmer says this is what hooked him on storm chasing, which he's been doing for 10 years since. He's also gotten better at holding a camera steady since then. See this video for more footage of the '99 twister.

7) This giant wedge tornado was filmed a few hundred miles north of Tornado Alley in Manitoba, but it'd be right at home in Kansas or Oklahoma. It gives the storm chasers a scare until it settles into a groove and churns around in place, but what it lacks in mobility it more than makes up for with size and power.


6) Kansas' McConnell Air Force Base takes a beating in this footage of a monstrous EF5 twister in April 1991. The highlight comes in the clip's second minute, when the funnel takes a sudden turn toward the camera and roars through a parking lot just a few hundred feet away. This video shows the same tornado a little later in the town of Andover, where it killed 18 people.


5) Filmed in Ellis, Colo., in May 2007, this tornado was on a mission. The clip opens with a frantic scene — the chasers become the chased as they flee down the highway in reverse — but you can clearly see how wildly it's rotating at several points, especially between the 1:35 and 2:20 marks, when it rips apart a building and several trees.


4) This isn't the strongest or biggest tornado of our top 10, but it does run over the camera, which helps. Roger Hill carefully places us directly in the path of an approaching twister, adjusts the camera so we can see it coming, then bolts. There's a happy ending, as the clip's title gives away, when we see a presumably frightened cow safely amble out of the tornado's path.


3) This clip of a quarter-mile-wide EF4 tornado in Manchester, S.D., has been called "the most amazing tornado footage of all time," albeit by the guy who shot it. But it's Timmer again, and since his online bio says he's already seen 230 tornadoes in his decade of storm chasing, he'd probably know as well as anyone. Timmer lists this EF4 among his most "notable tornado intercepts." It was apparently also notable for someone in the background named Alex.


2) National Geographic produced this montage, which is basically its own "best tornado videos" clip. Not only does it compile a bounty of great twister footage from around the country, but it's set against a nice, subtle techno beat. Cows reacting to a tornado is as funny as you'd imagine, and watching people helplessly film their houses being obliterated is as painful as you'd imagine.


1) Jim Reed, the guy who chased a tornado on foot in our No. 10 clip, and his assistant Katie Bay discover this funnel cloud in the air above them before it touches down. They're lucky at first when it snakes away from them to land, but its invisible tip quickly becomes a roaring tornado that heads right for them.