The Village Cigar Store and the Mystery Mosaic 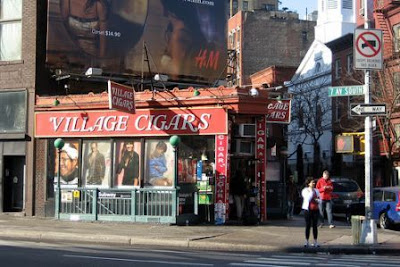 While the neighborhood changes, the Village Cigar store has been an unaltering presence at the sharp point where Christopher Street runs into Seventh Avenue for nearly a century. Slathered with metal signs and often peeling paint, the eccentric little building never seems to change.

But more interesting than the building is the mysterious little triangular mosaic imbedded into the pavement just in front of the cigar store's entrance. It is all that remains of a David and Goliath-type struggle of a man who fought City Hall. And won.

At the turn of the 20th Century Seventh Avenue terminated at 11th Street in Greenwich Village as originally laid out in the 1811 Commissioners' Plan. The famous midtown grid pattern of streets and avenues was designed by a committee of three in an astonishing example of urban preplanning -- decades before the city would expand that far north.

Exactly a century later in 1911, however, civic groups pushed to extend Seventh Avenue south to better connect midtown to downtown as well as to augment the commercial access to the Village. The extension would also allow construction of the IRT subway along 7th Avenue southward.

Armed with the power of eminant domain, the City seized property in the path of the projected avenue and, like Sherman cutting through Georgia, demolished everything in its way including buildings like the historic 1840 Greek Revival Bedford Street Methodist Church. And the Voorhis Apartments.

And that's when the fight began.

The Voorhis was a five-story apartment building facing Christopher Street and owned by David Hess. Hess fought the City in an attempt to save his building, but lost. All that was left of his property in 1914 was a tiny triangle of land approximately 500 square inches.

The City, in an act of what Hess must have considered the ultimate insult, wanted him to donate the little plot to New York to become part of the public sidewalk. Hess refused. The City had taken his building but they could not have his triangle.

David Hess went to court against the City of New York and won. When the little Village Cigar store went up a few years later, Hess commissioned the in-your-face mosaic. Everyone who stood on that corner would know that David Hess fought and won. 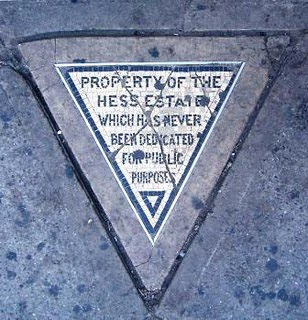 In 1938, having made their point, the Hess Estate sold the tiny triangle to The Village Cigar store for $1000 -- about $2 per inch. Today the Village Cigar store looks exactly as it does in any vintage photograph. Its sole architectural feature is the interesting pressed and painted metal cornice. While not a significant building, it remains an old friend in the Village. And the story of the little mosaic triangle in front of it is priceless.